Mandala art in Sanskrit means a circle or a discoid object, which typically holds a great place in Hinduism and Buddhism. Traditionally easy mandala artwork is a geometric design or a pattern or symbol representing a cosmos or deities concerning the various heavenly worlds.

In simple words, easy mandala artwork represents the different aspects of the universe. Many people use it as mediation and a symbol of prayer in countries like China, Japan, and Tibet. Renowned artist Saudamini Madra believes that the most interesting part of the process is finding peace in the symmetry of the design and the universe holding infinity.

You can produce them on paper or cloth or draw on a surface with the help of threads. Additionally, they can even be fashioned in bronze and were built in stones. Mandalas also hold symbolic and meditative meanings. Another Artist and maths professor Fernanda Boanfini says that you can feel the sense of ultimate calmness and peace while drawing mandalas art. You can feel that your breathing and heartbeat slow down during the process. He adds that “the sensation in your mind and their connection is very good”.

Even in the easiest and basic forms, mandalas artwork are circles within a square. You can simply arrange them into multiple sections which form or organize around a central point.

Siddhartha Gautama (founder of Buddhism), was born in Nepal. Historians believe that he was born around 560 B.C. But surprisingly, there is no clear and confirmed date of his birth date.

We all know the story of Gautama, who left his kingdom after learning about human suffering and infinite pain. After leaving his kingdom, he started seeking to attain enlightenment through the medium of meditation and thoughtful action. Along with this, he started to preach his philosophy all across parts of India. Eventually, he gained followers and established the first-ever sangha.

Sangha is a Buddhist community of monks. These Buddhist monks then traveled through the Silk Road and spread the preachings and Buddhism to other places. Silk Road was an ancient trade route network connecting the East and the West. Buddhist monks used to carry mandalas and brought forth the practice of painting spiritual compilations to other parts of Asia furthermore. These appeared in the regions like Tibet, China, and Japan around the 4th century.

Although the Easy Mandala artwork has roots in Buddhism, it soon became a big part of Hinduism and other major religions. Sand Mandala paintings in Buddhism have their origin in Vajrayana Buddhism to fulfill meditative purposes. The center contains a circle representing an individual’s spiritual enlightenment and freedom, or some even consider it the Buddha.

Dreamcatchers of Native American cultures are evidence of Mandala art. The Rose window of the Chartres Cathedral in France also clearly shows some pieces of famous artwork in their infrastructure. The rounded stained-glass window illustrates Christ in the middle of the structure to represent the eternal truth. This structure symbolizes divinity in Christian religious art. The Mandala artwork is also known as Cosmograms which depicts the cosmos in miniature form.

Mandala artwork is a popular kind of art among people of many faiths. They frequently use it to symbolize the universe, the cosmos, and various facets of existence. Mandala artwork is a religious art style that has its roots in Hinduism, Buddhism, Jainism, and Taoism. There is a mandala art form that will appeal to you regardless of your beliefs. So, whether you want to explore other forms of art or deepen your spirituality, mandala art is a great alternative to consider. 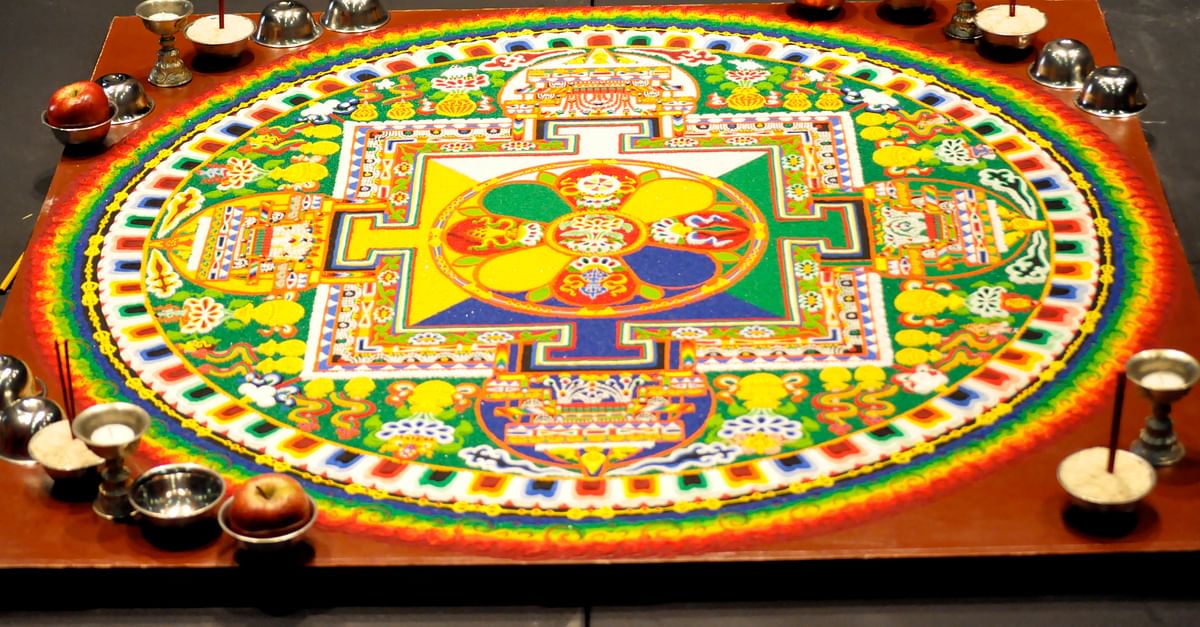 It is interesting how Tibetan Buddhist monks make cosmic diagrams using colored sand. They have been practicing this artwork for centuries now. These monks enter a flow state with every grain of sand they place using metal funnels and sticks. When the process reaches its center point, they experience something very extraordinary. Additionally, they encounter the transcendence of self and the reality of the universe where all living beings are free from their sufferings. Lastly comes the final stage of this process, where Buddhists destroy their weeks of labor for the mandala artwork. This process of mandala art in Buddhism represents non-attachment and denotes the impermanence of all the things around us. 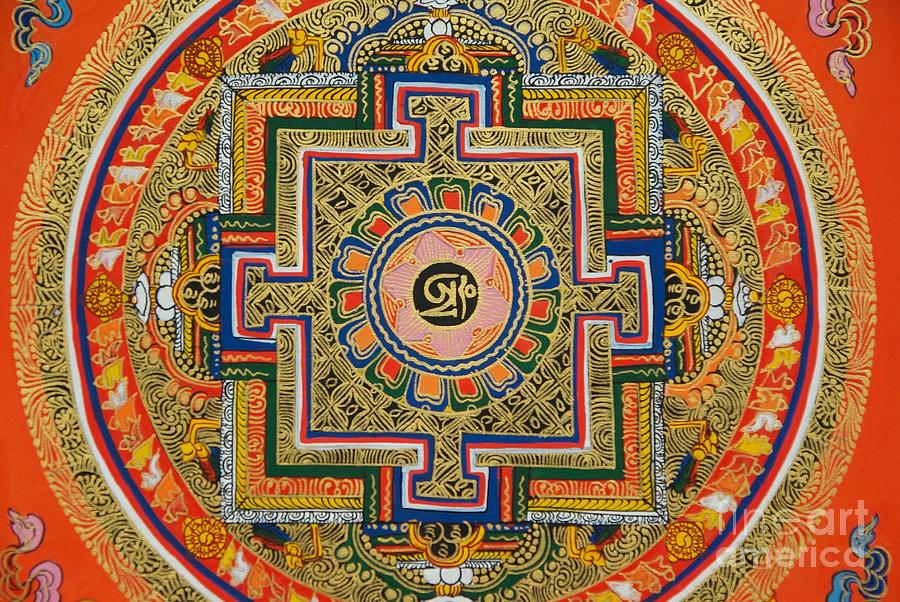 Mandala Art In Hinduism came from Buddhism and is called Yantras. The traditional yantras are square with a gate around a center circle. These gates contain one of the Hindu gods. Additionally, it is believed that the artist summons the god to help them discover cosmic truth through the meditative creation of these mandalas.

Mandalas can be easily related to religious traditions, meditation, and modern contexts. The traditional Tibetan Mandala found in Buddhism represents the enlightenment state of Buddha through sand art. Uniquely, patterns for this art are created on the ground with the help of metal and a small tube, giving the same texture and arrangement of the grains.

Previously, we learned that these mandalas take weeks to create, and then, soon after their completion, they are destroyed, believing that nothing is ever permanent in this universe. In the modern era, mandala artwork has got a new meaning. In yoga, mandalas depict the ancient idea of signifying a sacred room for shutting away external influences.

Mandalas are usually positioned around the studio and occasionally drawn while meditating. Many communities healing circles. This practice derives its root from the Native Americans. These circles help restore the body, mind, and heart furthermore.  You can also see mandalas in your favorite dream catchers, which means to protect an individual’s sleep. Moreover, dream catchers are very popular in western cultures.

In Asia, mandala artwork started gaining popularity due to its meditative element in different cultures. Moreover, for Hindus and Buddhists, mandalas and thangkas represent the universe and the Path of enlightenment.

Some symbols are common among many mandala designs among all the complex circular patterns of mandala art. Traditionally, it is believed that these designs usually represent Buddha’s presence of mind in an abstract form. The artwork depicts jewelry, flowers, trees, and even wheels.

Many of you must have wondered what the dot in the center of the mandala’s art represents. So it means a part of humanity free of all dimensions. You can also consider the dot as the beginning point of contemplation and devotion to the unknown. The dozens of geometrical lines and patterns surrounding this dot symbolize the universe. Then a larger outer circle encircles this pattern.

The boundary of the outer circle of the mandala artwork represents the cyclic nature of human life. In fact, mandalas can also be studied to inspire and spread the wholesome meaning of art.

In the world of art, symbols are key to communicating a message to the viewer. Identifying the commonly appearing symbols in the artwork can give a better understanding of the themes and messages conveyed. Here are some common symbols in mandalas artwork:

Do check out our detailed article on Mandala art for beginners